We awoke to our final day on the Coast to Coast with rain. Our host Robert came in from outside and announced that it was “warm” rain! At least we had taken the attic room option so we didn’t need to worry about the logistics of a wet tent! The light rain cleared after an hour or so into the walk but remained humid and overcast for the remainder of the day.

Today we had 19km until we reached our final coast to coast destination at the seaside village of Robin Hood’s Bay where we would do the traditional dip your toes in the North Sea and toss our pebbles we had taken with us all the way from St Bees on the west coast to Robin Hood’s Bay on the east. The route today spoilt us with a variety of landscapes we have become familiar with over the last 2 weeks. This included the always welcome walk through pretty woods with plenty of musical bird singing and picturesque becks and waterfalls. We also plodded through at least 3km of moors with enough peat bog to wet the toes (we won’t be missing these). As well as a couple of small villages, meadows and the final coastal circuit before arriving at the charming fishing village of Robin Hood’s Bay! 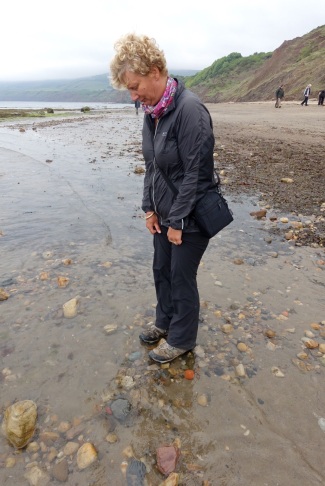 After settling in and enjoying a little sightseeing, we were able to catch up with a number of fellow Coast to Coasters who we had been bumping into over the last week or so and had a celebratory drink and dinner before bidding our farewells as tomorrow we will be heading off to York.