Did I tell you about the story of the sinking of SS Nord at Munro Bight? We were all enchanted by our Parks Ranger at Retakunna Huts. Georgie is a 20’s something seemingly innocent, unspoiled and infectious young lady that had us amused and entertained with the information she imparted. She gave us the good oil on the next days (today’s) itinerary and the expected times we should leave in the morning to ensure we had plenty of time to enjoy all that was on offer and still catch our allocated 4:00pm shuttle bus from Fortescue Bay back to Port Arthur (about a 20min journey).

Whilst she informed us of the most beautiful forests on the track we would be walking through, including the rain forests along with the most magnificent giant ancient fern trees, she also told us of the spectacular views we would see out at Cape Hauy if the weather was kind! She finally finished in a very natural and matter of fact way that the finishing ritual for the walk is to strip off and go naked for a swim at Fortescue Bay! It is invigorating and liberating and a great way to finish off with… (She of course was speaking from first hand experience!)

The next morning we woke to a spectacular pink sky (shepherds warning?). No time for fluffing as some of our party wanted us on the track by 8:30am (even though we were told that for the 4:00pm bus we could push off at 9:00!)

During our morning hut rituals we heard a helicopter arrive and watched Georgie all excited go off to greet the men that had just arrived. She wasn’t actually expecting a visit today only to discover they had come to the wrong hut! But never mind, they would still carry out their duties on this hut anyway! Georgie explained to us that they were here to spray the huts for insects and spiders, a very diplomatic answer, after hearing from the men themselves that it was also for the bed bugs! (Rest assured, there was no problem, but another example of just the lengths that the Tassie Parks people go to, to ensure everyone has an enjoyable experience on this walk!)

After a group photo (taken by one of the men spraying our rooms for bed bugs!) we were off for the final days walk. We had also been informed that the rain front would hit in about 4hrs time (approx the time we would reach Cape Hauy!)

Georgies description of the days walk were spot on and hopefully the photos will speak of the scenery rather than me! We had more story seats and poor Bretty got a little carried away with his story telling that nobody could tell if it was made up or factual and whilst he did it with such theatricals, some in the group refused him a further opportunity! (Such party poopers!)

We did make it out to Cape Hauy before the weather turned which made it for more dramatic viewing with dark clouds, sun, then rain followed by rainbows! We continued on to Fortescue Bay in light rain arriving with close to an hour to spare so that our own Bretty had plenty of time to do the nudy swim! But then he had packed his bathers, so would be a waste not to use them! 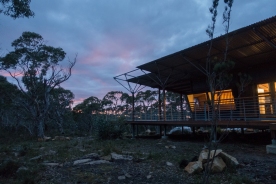 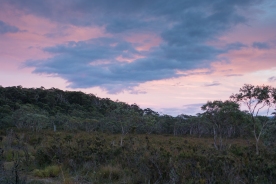 Fresh for the final day of walking 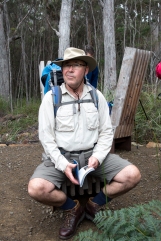 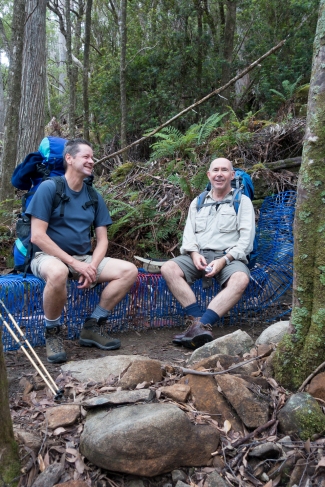 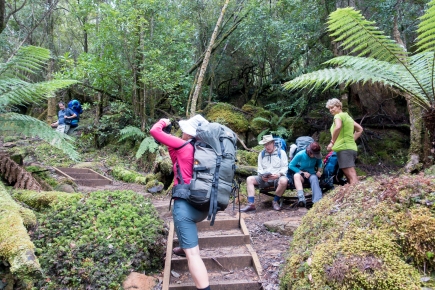 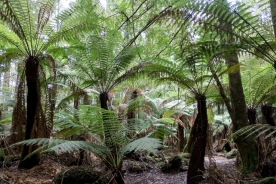 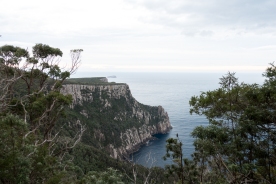 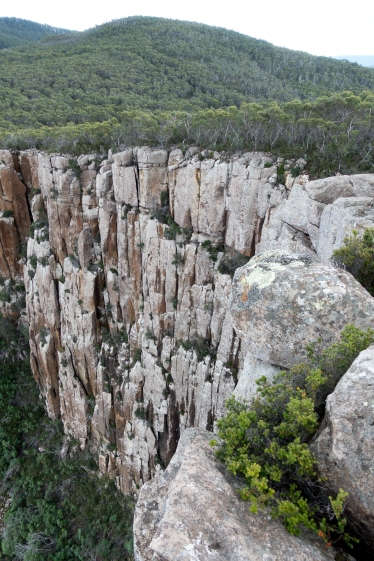 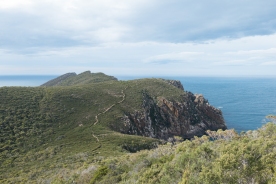 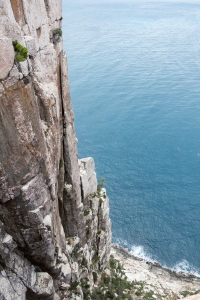 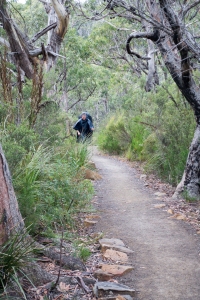 Official End of the Track 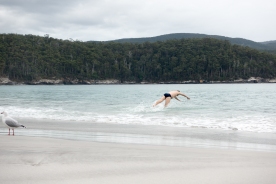 In all his glory! 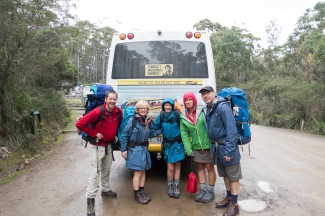 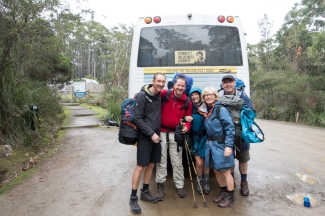 Well that just about wraps up our Three Capes Track adventure, but not without telling some tales of our travelling companions…

Lets start with Brett and Meryl. No one could believe how big and heavy Bretts backpack was. What could he possibly have in there? All I can say is that Brett was prepared for everything! Fine Dining (White linen and Red Wine), Chefs apron, Additional walking shoes, Storm Jacket, Poncho, Solar powered cabin lantern. Gourmet lunch fillers comprising of jars of pickles, sun dried tomatoes, cheese, salami sausages, just to name a few. I also think he made sure his pack was stuffed full to stop Meryl getting any ideas of hitching a ride. Whilst Brett was well prepared, he had failed to calculate the effect a 20kg plus backpack and gravity has on ones shorts. It gave a new meaning to “builders crack” so much so, we were not sure why he even bothered wearing them due to the nuisance factor they caused him!

Meryl? Well she surely had us all whipped in line. We never had to worry about missing a bus (or flight for that matter) as Meryl had everything in hand as long as we followed her instructions! Meryl wasn’t really fond of her backpack, but no loss as it wasn’t even hers! It was however large enough for her to take refuge inside it if the weather turned nasty.

David and Jenny. How much time do we have? (Ok, I’ll keep it brief!) The only reason for their heavy packs is that ALL their gear predates Noah’s Ark! Right down to the extra thick (for padding) hessian underwear! They claimed that they hadn’t done any serious bush walking for over 30 years as raising a family had taken priority, but more recently they can see freedom on the horizon with Ben now in his final year of high school. Jenny would constantly check for SOS messages from home whenever we got within cellular range, with none forthcoming. I’m not sure who it is that can see the freedom??? But the pièce de résistance of their kit would have to be their trusty 30 year old Italian full leather hiking boots that really should be donated to the Italian Alphs Hiking Museum! But why? (Other than lifting 2kg per boot every step you make), they are extremely comfortable, water proof and durable! I was scoffed at after explaining that Jenny and I were now on our second pair of modern synthetic lightweight Merrell hiking boots (forgot to mention that we had clocked up close to 2,000km in them). That doesn’t sound like good value for money if you are replacing them after 4 years of service! David’s boots simply needed retreads and they were as good as new!

He might have a point? But I still think they belong in a Museum!

And that brings me to us? Nothing really to report, cos, well we are “Perfect!” and I am the one  writing this! Oh all right… apparently it was alleged that one of us snores and farts in their sleep, there was no way of knowing who cos we had taken to sleeping together on a single bed which drew the accusation of being “love birds”!

The wrap… We all had a fabulous time and all got on extremely well. Brett summed it up as the three Daggy couples doing the three Capes Track. A bit harsh, but accurate.

Tasmania has done a superb job in putting this track together and the attention to detail is very much appreciated!

Want more Photos? Here for Landscape and Here for Portrait