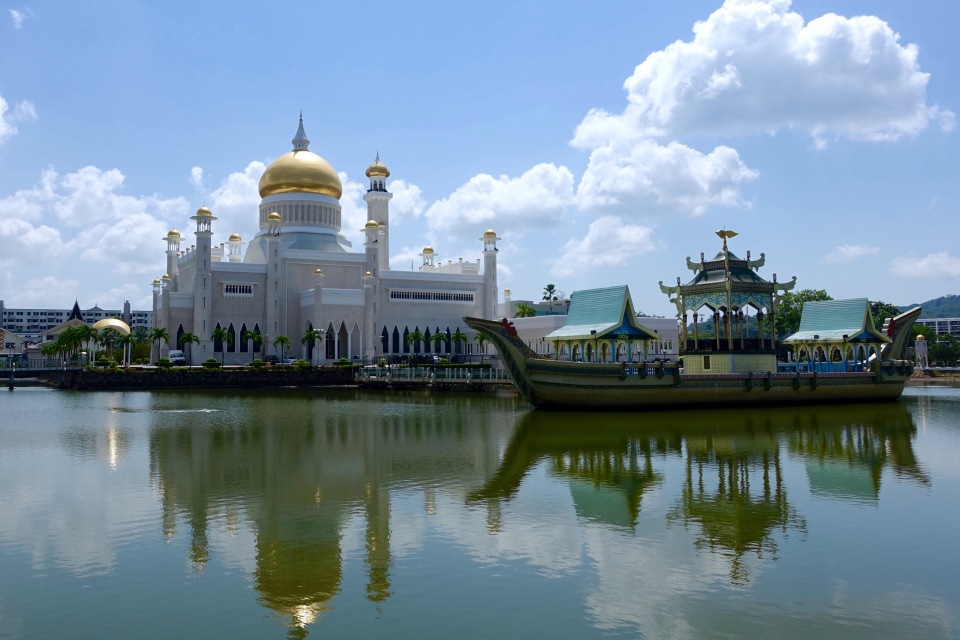 Flying home with Royal Brunei we took the opportunity to drop in for a few days to break the monotonous very long journey home.

We had planned on a 2 day, 1 night rainforest experience and after a bit of research decided on what looked to be the most professional or least shonky looking tour group which ended up being more challenging to organise than you’d expect. Firstly, the website had just recently had a major makeover and whilst it looked good, was only initially made compatible for mobile devices, this just made it hard filling out the online booking form. Then a few days later after not hearing back went back in and discovered that the web form had failed on us, so resorted to their online enquiry/email form. This also failed! Still determined, we searched for any other sites or information and found the company that runs the tours to the Ulu Ulu Resort. Their website just listed an email address and local phone numbers. So off we sent an email enquiry only to get an automatic email response stating that this email is no longer valid and specified the new email address. By this stage we were a few days from departing so I dropped into Royal Brunei airlines and asked if they could organise it on our behalf, but got the response saying it would take a number of days to arrange and we’d have left before finalising, but they gave me their direct number. So after trying repeatedly to ring all numbers we had at our disposal and not one of them being answered we resorted to responding to the new email address, or so we thought!

We left for our big adventure but with no tour planned for Brunei! Well we did finally manage to book our tour when we realised we had responded to the old email address sometime well into our holiday! We had booked the deluxe room at the resort and were anxious to get confirmation as there were only 2 rooms (rainforest bungalows) in the resort. We needn’t have worried as bizarrely, we were the only one’s on the tour and the only ones staying at the resort, but maybe I shouldn’t have been surprised due to the difficulty I had in just trying to book this tour!

Initially we thought that the cost was a little on the expensive side, but when we factored in our own private tour guide for 2 days, our own long boat driver at our disposal, a chef and kitchen hands plus other staff in the background, it was very reasonable. But after getting over the fact we were on our own in a remote empty resort, tucked away in secluded pristine rainforest, it simply felt surreal and very special.

The 2 day experience was fantastic. Just the transportation to the resort was an adventure, from a 45min water taxi skimming across the glass like surface at dizzying speeds across open waters and gracefully snaking its way down narrow canals whilst throwing sheets of spray with every turn. Then into a minivan to take us to the longboat launch for another exiting trip up river to the resort sitting low in the water and gliding over smooth water with skilful manoeuvres when negotiating the shallow rapids over boulders and rocks without bottoming out the boat. (Mainly due to the two very lean passengers resulting from previous exploits).

Between eating and sleeping, our activities included swimming, kayaking, tubing down the river and rapids, a night walk in the rainforest, which we initially thought was going to be restricted to just the resort boardwalk, but this quickly evaporated when we were escorted back to the longboat in pitch darkness and whisked downriver before walking up a smaller creek spotting frogs and spiders and other creepy crawlies which also included the hero of the evening a menacing big black ugly and hairy Tarantula sitting at the entrance of its home in the side of the creek bank. I don’t think Jenny was at all impressed! We also were treated to a most memorable sunrise from the top of the rainforest tree canopy after climbing the top of a hill and then climbing a further 60m high steel structure to get spectacular views across the rainforest, not to mention the wonderful sounds of the forest coming to life particularly from all the bird life! It was well worth the 4:30am wake up call! The final activity before departing was visiting a rainforest waterfall with the pond at the base hosting a small breed of fish that love eating dead flesh! If you are game enough to stand still long enough, they all latch on to your feet and toes and have a smorgasbord! It did take some time to get used to the nibbling on your toes sensation, but a lot of fun! 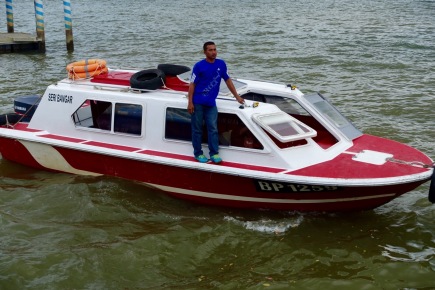 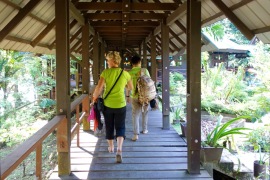 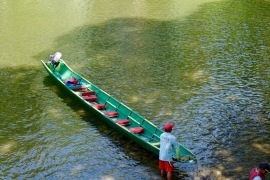 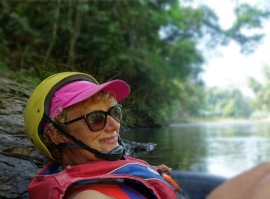 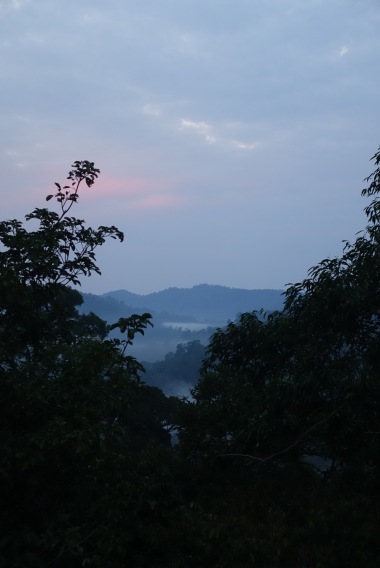 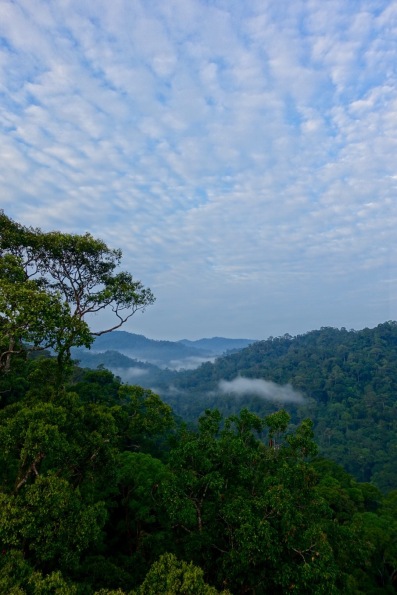 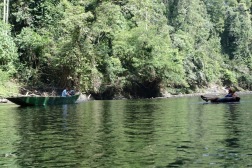 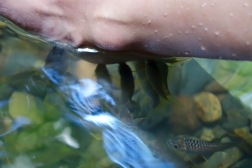 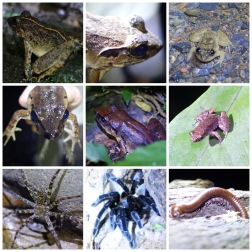 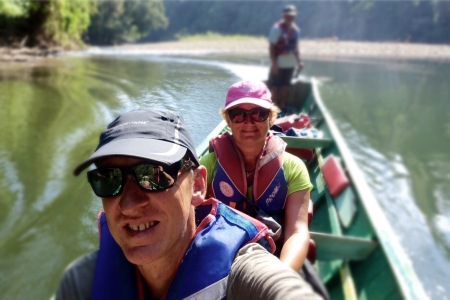 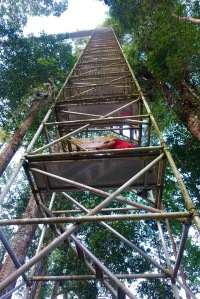 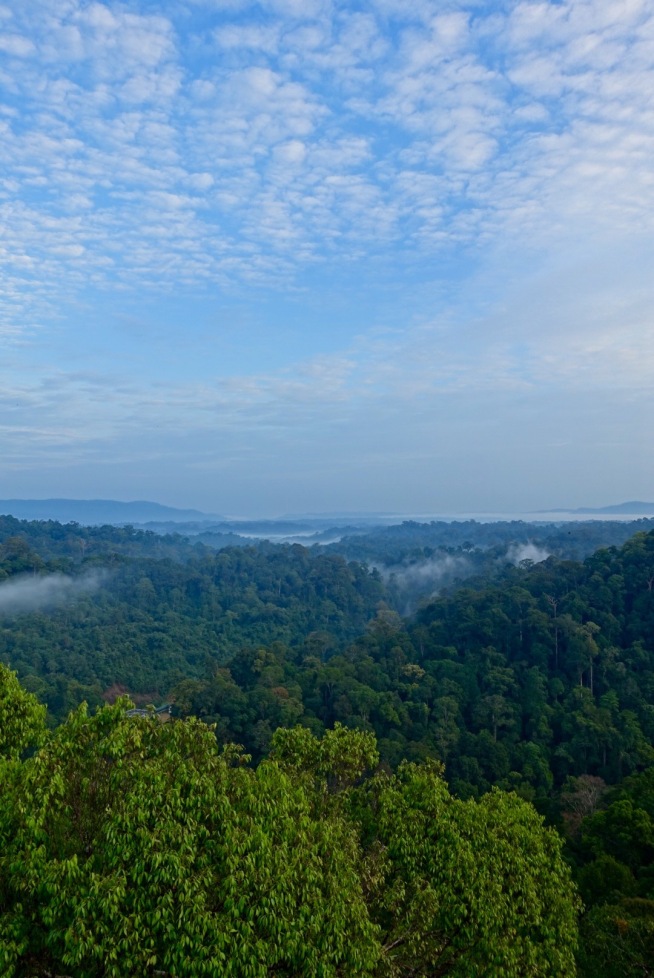 If you do get a chance to visit Brunei, we can thoroughly recommend a rainforest tour, preferably an overnight one as it is a memorable experience. We have been very happy flying with Royal Brunei and the service and planes they operate have been excellent and represent very good value for the budget conscious.

But before we depart Brunei, we couldn’t pass up an opportunity to go spotting the Brunei Proboscis monkey. (I believe that I may belong to their ancestral line due to my hair colour and other notable features!) With a last minute tour booked with the hotel concierge for an early morning start on the day we were to depart, we headed up the waterways hoping for a sighting, but thinking it was probably wishful thinking having learnt that they are quite shy, but whilst hard to spot, we did manage numerous sightings along the mangroves enough to justify the trip and get a good look at them, surprised to see how small they actually are (and difficult to photograph!). 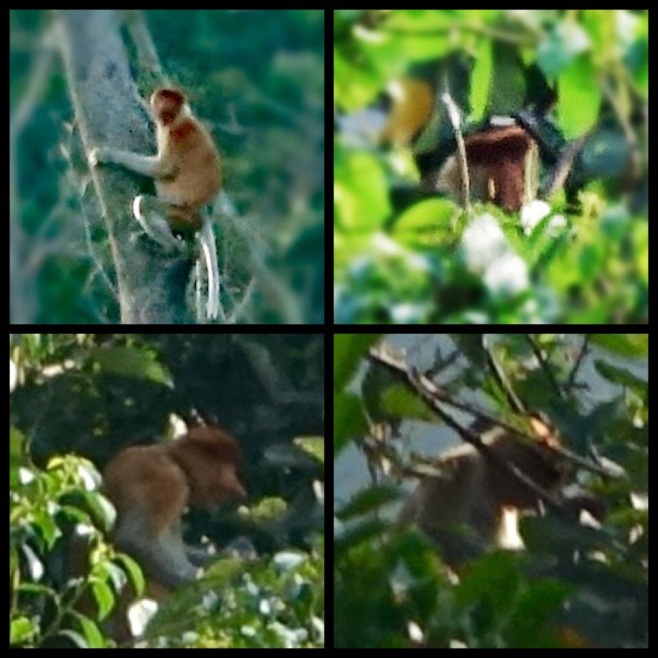 Only another 7hrs on the plane and it will all be over… Until next time!