Today’s walk could have many titles, like “Rain, rain go away…” Or “Slip sliding away” or simply “Hard core”!

We broke the next stage of the walk into 2 sections, so we had a leisurely 14km with a single climb. It had rained during the night and early morning, but had clearer with more rain forecast for early afternoon. Plenty of time to break the back off the walk and possibly arrive at the next destination before the rain came. Well that was the plan, along with attempting the ridge route option with spectacular views.

We were in high spirits as we followed a rocky path beside an energetic river excited by all the rain it was carrying. We were soon climbing, gently at first, then steeper and steeper, until we were scrabbling up a rocky outcrop that earlier I had spotted but dismissed would be on-route on the grounds that it looked too dangerous. Once we conquered this, our hearts sank as we then saw we had yet more climbing and with the altitude we were now being accompanied by a stiff chilling wind and finally when we reached today’s summit, the rain came! We scrambled for some shelter to kit up in wet weather gear and to down some much needed lunch before deciding to take the easy route (particularly when a group appeared who had just come along the ridge route and advised that it wouldn’t be a pleasant option, more like down right dangerous). Going down had its challenges. The main path quickly became a stream of flowing water gushing down finding its way to the nearest river. Trying to navigate dry ground when most of it was under water, or when it appeared dry, your boot sunk inches with water squishing in all directions, it was like walking on thick sponge. We both ended up sliding on knees or butts at different times which gave us both the giggles. In the end, there was no chance of keeping the feet dry and we found it much easier to simply wade down the track, occasionally dodging the sloshy mud. 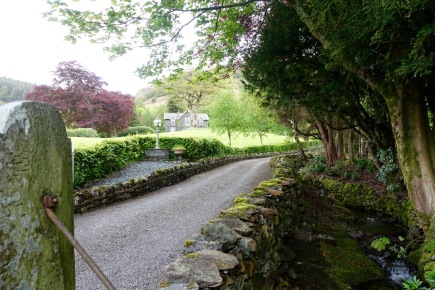 We did make it with most of today’s challenge being the weather. We were rewarded with up market accommodation and a nice hot bath!

One Response to “Grasmere – Coast to Coast (Day 3)”